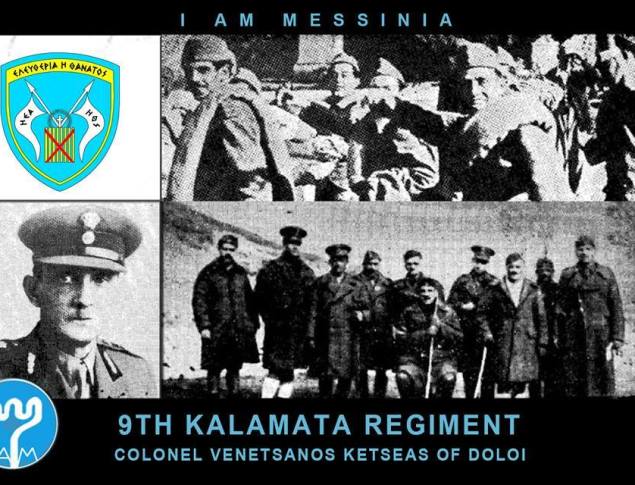 Colonel Venetsanos Ketseas
9th Kalamata Regiment
“Venetsanos Ketseas was born in 1892 at Doloi, Avias, in the region of Mani, where the first successful independence movement for Greece begun in the early 1821. He finished elementary school in the village, and went to high school Kalamata near the town’s Cathedral Ypapanti (Presentation of the Savior) and graduated in 1910. In February 1911 he joined the 11th Regiment of Tripoli as corporal, where continually served up to his admission to the officers training Academy. He took part in the IV Infantry Division during the two Balkan wars, and despite the fact that he was young and inexperienced, he distinguished himself for his heroism and his administrative ability. He graduated from the Academy in 1916 as a second lieutenant in the Infantry, 54th in a class of 311.

He served in WW1 on the Macedonian front from 1916 to 1918, where he was known for his boldness and initiative. During the Asia Minor campaign he commanded a battalion, where he also distinguished himself for his heroism and self-sacrifice. During the collapse of this front, he in Smyrna, and took the initiative to evacuate many women and children to escape the massacre that would follow.

He married in 1924  Eutychia Tzailopoulos of Kalamata, with whom he had two children. In 1927 he attended the Military Academy and then served in the 8th and 11th Infantry Regiments, and then with the IV and IX Infantry Divisions.

In 1937 he received his commission to command the 9th Regiment at Kalamata. His men all appreciated the integrity of his character and his Christian faith, his fair commitment to the laws of military regulations, and above all for the professional military training he initiated. His regimental training would well serve his men and nation. During the defense of Greece, after the October 28th 1940 Italian invasion, the 9th Regiment served on the front line in Epirus as part of the IV Division.